I had just been cut from the AAU basketball team, All Ohio,  that I had played with a year before because I wasn’t able to compete at the level I used to be able to  because of my condition.  My burst, acceleration, and quickness had consistently gone down since 2011.  I wasn’t the same player I used to be.  I knew that if I wanted to get back to where I used to be, I needed to fix myself.  Spring Break was pretty much an escape from life for me at this point.  Hanging out with my brother and  a few friends of mine  on the beach was what I needed to create a false sense of reality. My life seemed like it was falling apart.  Those 4 days away where what I needed.  My mom who never needs a break, though, was on her I-pad the whole trip,  looking up facts about FAI surgery, athletes who’ve had the surgery, and doctors who’ve conducted it.  My mom saved me. She found three doctors and sent my stuff out.  We waited. Watied in hope.  Waited for the first person to respond.  Dr. Marc Philippon of the Steadman Clinic in Vail, Colorado who had operated on Alex Rodriguez, Lady Gaga,  and Brandt Snedeker, just to name a few, was the first who responded.  He  gave me hope that I could come back and play.  A plan was in motion. 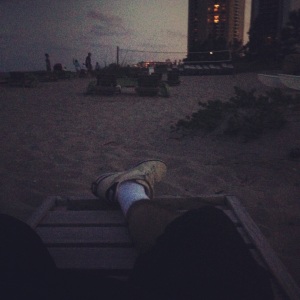